Distinguished Lecturer, Chantal Akerman’s “poetic diaspora tale” NEWS FROM HOME screened in October 2013 at the Museum of Modern Art (introduced by the filmmaker).

Described by Melissa Anderson as “one of the most unheralded portraits of the city,” NEWS FROM HOME is as much a symphony of urban geometric abstraction as it is a poetic diaspora tale. Inspired by the letters she received from her mother while living in New York, Akerman returned to the city after an absence and filmed its streets with her Pentax camera. “Although Akerman’s New York is largely a city of non-sites—empty Tribeca alleys, dingy Midtown parking lots, an abandoned gas station tucked into the crook of another building’s wall—the symmetry of her composition gives it the classic aura of ancient Rome” (J. Hoberman). From the eternal city Akerman reads her mother’s letters, conjuring a sense of distant voices and still lives. Digital preservation courtesy The Royal Film Archive of Belgium.–MOMA

For more information on this film, please visit: http://www.moma.org/visit/calendar/film_screenings/19316 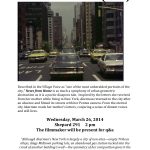 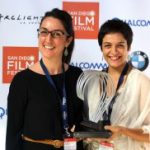