Eight of Spades
Dir. Melisande Bliss
USA | 2016 | 17 mins | Language: English
“Eight of Spades” unfolds over the course of one night, as Cassie, an aspiring actress, encounters Edmund, a mysterious Shakespeare- spouting stranger claiming to be a Hollywood producer. When he tells her she looks just right for a part in his film, Cassie is intrigued, and finds herself drawn deeper and deeper into his bizarre world, as the lines between fact and fiction begin to blur… 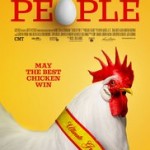