Rania was listed as one of the “25 New faces of Independent Film″ by Filmmaker Magazine. And her feature film debut Ok, Enough, Goodbye (Tayeb, Khalas, Yalla) won “Best New Directors from the Arab World” at the Abu Dhabi Film Festival and is now traveling the festival circuit. 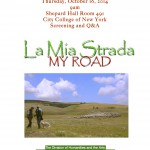